The Only Golf Swing You’ll Ever Need…

Look, hitting a golf ball better is about returning the club to impact with the least amount of moving effort.

This is crucial to understand.

Unlike traditional swings, the Single Plane Swing starts in the same position as the shaft ends up at impact.

Which means, less moving parts to the swing.

The mechanics are easier to learn and repeat. Thereby simplifying ball-striking for anyone.

By keeping your club and body on plane you load the down stroke with explosive power.

The follow through blasts the ball into the air for near-perfect shots from the tee box or the fairway.

You'll love all the extra yards this simplified swing gives you.

Straight towering shots are the hallmark of great golfers.

The Single Plane Swing practically guarantees you strike the ball with precision. Because you start the swing at the point of impact.

This simple shift in body and club positioning keeps the ball on target.

Right from the start of the swing.

You can’t screw up. Because the swing does not start at one point and end up at another. That extra action is what throws the club head off course.

With the Single Plane Swing, the club head finishes where it started!

​Reduces Stress On The Back, Elbows And Body

The Single Plane Golf Swing maintains the club shaft and spine/intersect from address to impact. Allowing for a smooth-as-silk swing motion.

The amount of upward motion of the spine is reduced.

The ripple effect also reduces the movement of the body and results in more consistency.

​Generates Maximum Efficiency From Each Swing

Efficiency comes from getting more out of less.

The Single Plane Swing requires less rotation of the body... and... less upward compression of the back.

Due to superior bio-mechanics, it produces increased power and force... but... with lower energy output.

(Perfect for older golfers who need to conserve energy.)

Who Should Consider Trying The Single Plane Swing?

I could say anyone who wants to play better golf for the rest of their playing days. But I won’t because… the fact is… certain golfers will get a lot more out of switching to this swing than others.

• Golfers who have not seen their scores go down in quite some time. If that’s you, then giving the single plane swing a shot is the smart thing to do. Nothing affects your score as much as your ability to hit the ball pure and true. This swing will do that for you.

• Golfers who have an erratic swing. Do you slice, hook, and otherwise miss fairways and greens with the regularity of a Swiss watch? Then you definitely want to try out the single plane swing. It’s the most accurate swing you’ll ever learn.

• Golfers who are frustrated and thinking of chucking their bag in the nearest water hazard. Golf is frustrating only because you can’t hit the ball where you want. That’s really the only reason. The single plane swing gives you the control you need to start having fun again on the links.

• Golfers who injured themselves or endure back pain when swinging the club. No need to play in pain anymore. Many golfers who switched to the single plane swing no longer complain of aches and pains that once used to plague them.

• Golfers who are getting a little “over the hill” but still want to play at their best. Any golfer who is getting “up there” in age will benefit from adopting this swing. It’ll save your game and keep you playing as long as you want. Moe was still playing great golf at the age of 74 just a couple of weeks before his passing.

The only golfers I can think of who should pass are those who are getting the results they want from whatever swing they’re using now. Which is like one or two out of every 100 golfers in the world.

They did it by dumping their conventional two-plane swing and adopting the single plane swing instead.

Like Ron Kolbu who slashed 17 strokes clean off his score and practically eliminated the excruciating pain in his back. Here’s what he said:

“I was on a downward spiral and the scores were going up rapidly, and my back was killing me. So I made the switch to a single plane swing. Before the switch I had shot 94 (pretty awful for a 12hdcp ) then………………Back to back 77′s. Hitting 90% of the fairways... 70% of the greens and more than 30 yards extra with the driver. Go figure, I’m hooked, and the back is not screaming at me. Thanks.”

Is that great or what?

He’s not the only one.

Happy golfers from all over the country (and the world) are rediscovering Moe Norman’s single plane swing.

Check out this video of Bob Nash and how he and his wife are playing "pain-free" golf in their late 70's...

Just imagine owning your swing. Confidently striding to the tee box knowing it's gonna be another beauty.

Squinting as the ball sails straight so far down the fairway you'll need binoculars to follow it.

That's what Moe Norman called... The Feeling Of Greatness!

It's yours for the taking so go ahead and give it a try...

Let's get you started on a path to success...

A pocket-sized reference for practicing the swing correctly... 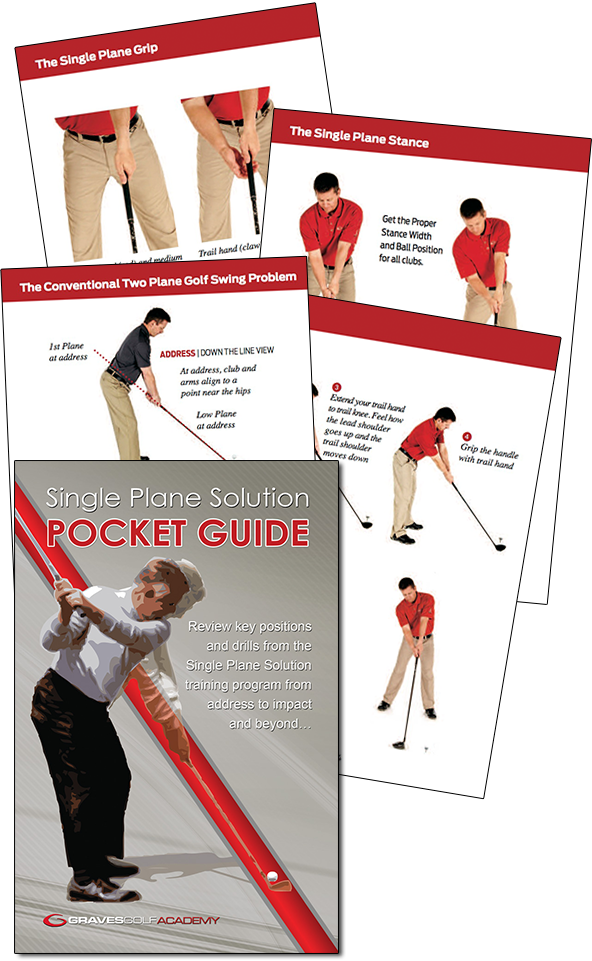