In December of 2009, Golf Digest’s Jaime Diaz sat down with Tiger Woods for a series of interviews. In these interviews, Tiger is asked to describe the state of his golf game and why he has decided to go through another swing change.

At this time, Tiger was in the transition from Hank Haney to Sean Foley. People always wonder why Tiger would change his swing after winning 6 major championships and averaging a PGA Tournament victory 33% of the time (31 of 93 events).

Tiger explained that “I felt like I could get better. People thought it was asinine for me to change my swing after I won the Masters by 12 shots. … Why would you want to change that? Well, I thought I could become better.”

“If I play my best, I’m pretty tough to beat. I’d like to play my best more frequently, and that’s the whole idea. That’s why you make changes. I thought I could become more consistent and play at a higher level more often. … I’ve always taken risks to try to become a better golfer, and that’s one of the things that has gotten me this far.”

Later, in the first interview with Diaz, Woods expressed that “Only two players have ever truly owned their swings: Moe Norman and Ben Hogan. I want to own mine. That’s where the satisfaction comes from.”

Starting with the Address Position, below you can see 2 views. One view is from down-the-line and the other is from face-on.

In the down-the-line view, Hogan begins with his arms hanging straight down from his shoulders. The 2 yellows lines intersecting each other is considered 2 planes, there is a club shaft plane and the arm plane.

With Moe, there is only one red line. This indicates the Single Plane line of the club shaft aligning with the trailing arm and running through the middle of the back.

The face-on images below examine another difference at address. Moe would always establish the “rod” position of the club shaft aligning with the lead arm. This happens because of spine tilt (notice how Moe’s lead shoulder is higher than the trail shoulder) and clubhead position.

You can see that Hogan begins where the club shaft does not align with the lead arm. Hogan has less spine tilt and the club head is positioned directly next to the golf ball. 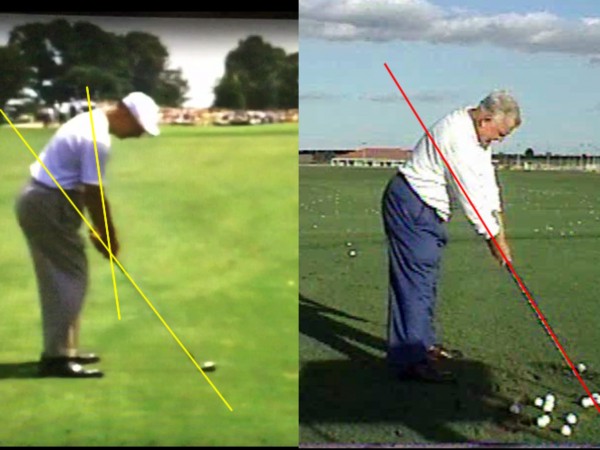 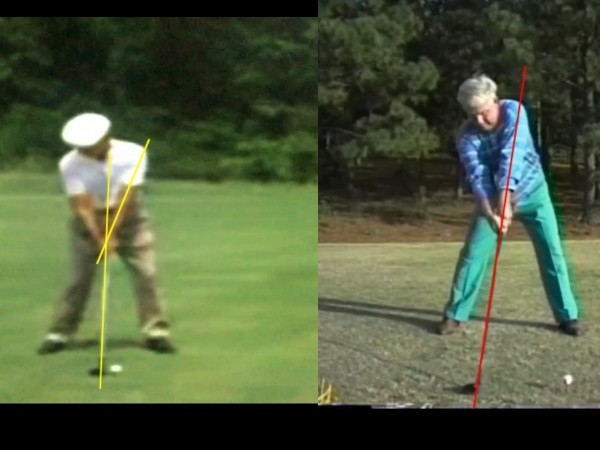 Moving into the backswing below, Hogan and Norman have multiple similarities in this position.

When the hands are positioned almost shoulder high in the backswing, notice the following: 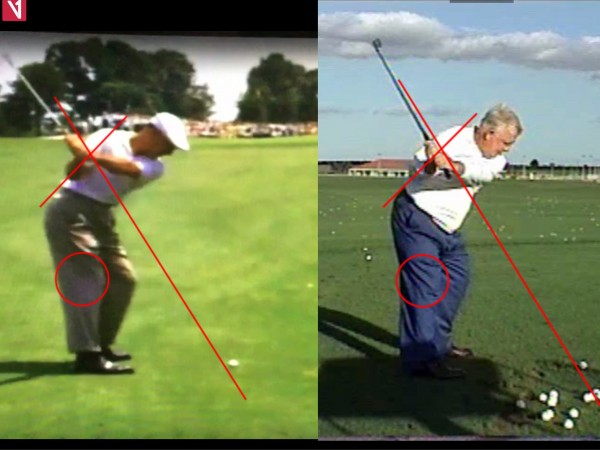 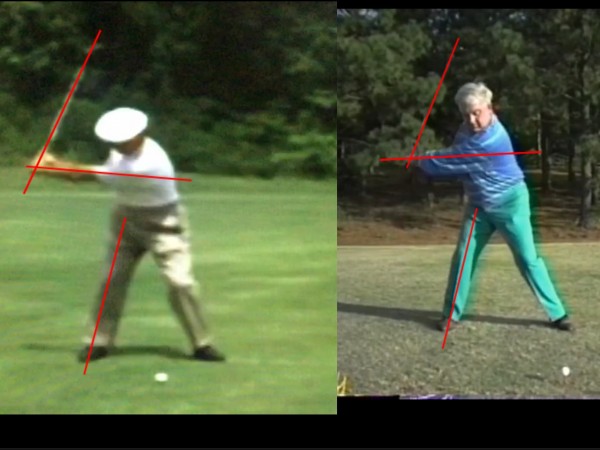 Below is Hogan and Norman in the hitting position (position 3) and also a frame just before impact. Once again, numerous similarities here from the face-on perspective: 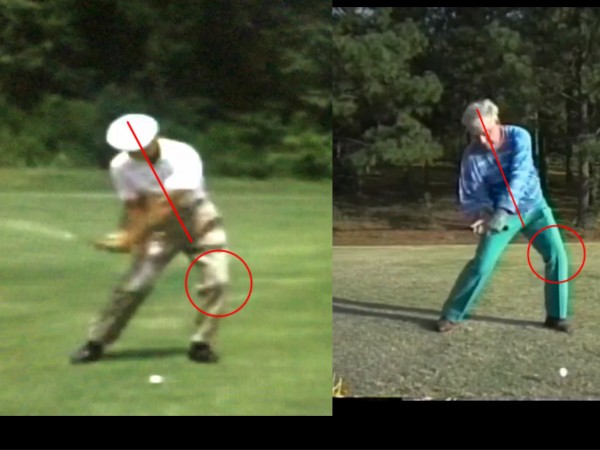 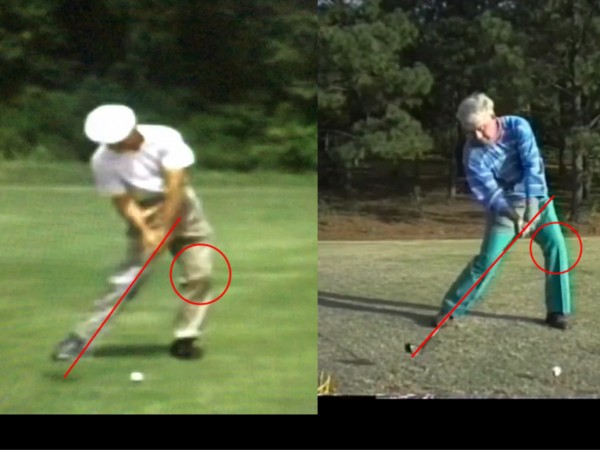 Let’s now take a look at the most important position in the golf swing, IMPACT.

Before we get into it, remember that a Single Plane Swing is defined as starting and impacting the club shaft on the same plane.

Ben Hogan and Moe Norman both start and impact on the same plane. Therefore, both are considered to be Single Plane and according to Tiger, “Only two players have ever truly owned their swings: Moe Norman and Ben Hogan”.

Another key aspect to the impact position below is that the trail foot is on the ground which allows for the pelvis and spine to stay in posture as the body rotates in the downswing. 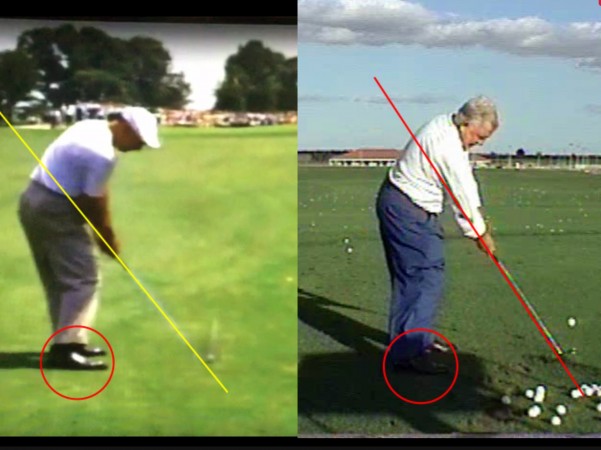 Lastly, is the release position and other than the address, is the most drastic difference between Hogan and Norman.

When looking at cause and effect, notice Hogan’s upper body in the release. Do you see how his spine is leaned back (otherwise known as a Reverse C)? This is caused by his lower body. Very quickly after impact, Hogan’s trail heal comes off the ground forcing his pelvis to slide forward and under him. This then causes his upper body to lean back.

With Moe, the lead knee remains flexed and the trail foot is on the ground which keeps his lower body in a stable position. The spine is able to achieve a straighter position which will alleviate any stress off of the back. 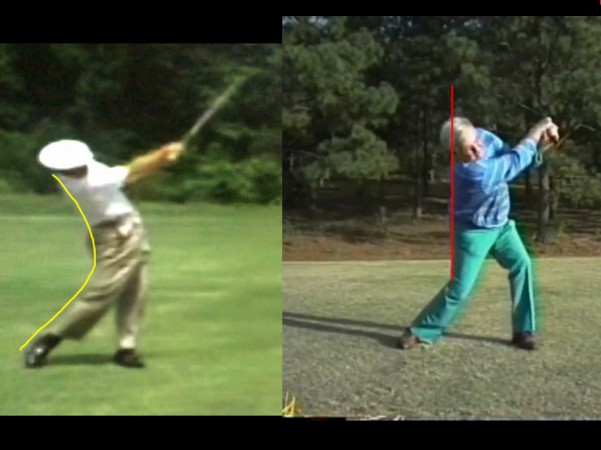